Today marks one month in our new home in Texas and things are settling down a bit in terms of logistics.

I dare not say they have concluded because there is still a significant logistical event on the horizon: school, which starts on August 16th.  Back in Canada, my kids all attended the same pre-k through Grade 6 school of about 500 students, and I also worked there most days.  Here in Texas, the oldest is transitioning to a junior high and the younger two will go to the community elementary school.  Both schools have well over 1000 students and I’m not working at either one (yet?!).  Honestly, this change is the hardest for me and I’m not quite ready to think about it yet aside from remarking on the registration process…

So that’s where things are at, one month in.  Still feeling abundantly blessed, still loving the warm weather and beautiful home.  Still growing patience and learning to be at peace in the waiting.

Anyone have any burning questions about moving to the US?  I’m all ears… but I might make you visit and have a margarita with me before I answer! 😉 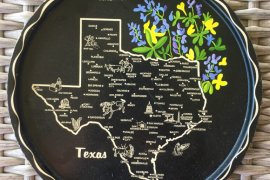