Last night, my Splurge Sorority sisters got together for our final gathering of the fourth round of splurging and it was a blast!  We started off with a tour and tasting at Big Rig Craft Distillery, the only craft distillery in the greater Edmonton area, providing the only spirits – including vodka, rum, whisky, gin, moonshine, and coffee cream liqueur – that are locally sourced, produced and distributed.  You had me at spirits! 😉

Thank you so much Mike and Joanna for a great tour!  I would highly recommend a tour and tasting at Big Rig Craft Distillery and while you’re at it, pick up some of their delicious wares!  I had already picked up some Saskatoon Vodka…

And nabbed some Sour Cherry Vodka as well since my handy husband made some sour cherry syrup from our very own cherry tree that is just begging to go in a cocktail!

After we left Big Rig, we headed back for some Saskatoon Vodka cocktails, snacks and the grand splurge unveiling!

Our gathering was actually a triple splurge celebration but I was the only one who had time to shop!  Here’s how I spent my $600 splurge money…

And then since I was over-budget for thrifting and found irresistible pieces, I used some of my Splurge money on thrifts I couldn’t resist!

Now, if you’re keeping track, you know that I,

Of course, there were those Anthro pieces I bought for Splurge, and returned…  That was hard.  I loved them but just couldn’t do fast fashion.  So instead, I bought a coffee maker.

It all has to do with my master plan.  I used to have a programmable coffee maker and would set it so I could wake up to coffee brewing then have my morning quiet time.  That old crappy coffee maker broke and since then I have been using a French press which makes delicious coffee but is rather time-consuming when one has 30 minutes max of quiet.  So, instead of replacing my crappy coffee maker with an equally crappy coffee maker, I “splurged” on a slightly more expensive one ($90) with decent reviews.  I don’t know if it is in fact decent, because it hasn’t arrived yet.  I will let you know!  Come over next week at 6am and we can test it out!

That left me with $22 to spend, exactly what I needed to get a lovely statement tank that corresponds to a Bible study I’m doing this fall…

Here’s the funny thing.  The night before Splurge, I had a vivid dream that the coffee maker and the top were delivered – by UPS specifically, go figure – in time for me to show my Splurge sisters!  Didn’t happen so there goes my made-for-TV-movie-miracle-ending, but I guess you can tell I have a wild side and wild dreams.  ;P

So there you have it – how I spent my $600 Splurge funds on shoes I can’t wear and things that haven’t been delivered but had a wonderful evening with friends nonetheless!  How would YOU spend $600 to splurge on something just for you?!! 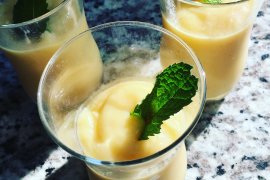 What I’ve Been Drinking 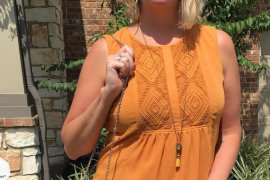 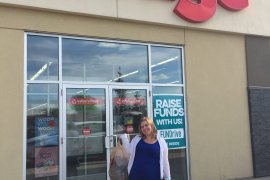