For my anniversary dinner at home, I had a simple but elegant meal of Penne with Vodka Sauce prepared for us with love by my twelve-year-old son! If he can make it, you can make it, and I bet you’ll love it as much as I do!

How do you make Vodka Sauce?

I have been making this vodka sauce since 1992. Hard to believe I was old enough to purchase vodka back then, but yes, I am that old! (Legal drinking age in Alberta is 18!) I like this recipe because it is so simple and doesn’t take anything fancy, so just when you think there’s NOTHING you can make for supper, BOOM! Delicious, elegant meal in no time! It’s so easy that my 12-year-old son, who is showing a keen interest in cooking lately, made it perfectly on his first attempt.

Though this recipe is simple, it can’t be rushed.  Patience is the key which is probably why my son was such a good chef for it. He is an incredibly patient kid (unlike his mother).  Jar vodka sauce cannot even compare to the flavour you get from slowly simmering this sauce.

Before you call child services, the amount of alcohol per serving is less than your average cough medicine AND a good portion of the alcohol in the vodka cooks off. So yes, it’s fine for the kids to eat it! In fact, this Penne with Vodka Sauce is so good that even my picky eater liked it! I could not believe it; she even asked for more.

The amount of red pepper flakes you add to this recipe is up to you. Since a) my son was making this Vodka Sauce recipe for the first time and b) I was playing with fire by even hoping my picky eater would try it, I used a minimal amount of heat.  It could easily be doubled for a little a more kick.

I usually complete the meal by serving  Penne with Vodka Sauce with a baguette, side Caesar salad, and a glass of very fancy wine for the adults. I could have asked the kids to set a romantic table a deux but we enjoy family meal time, so my 19th wedding anniversary dinner was a family affair.

Whether you make Penne with Vodka Sauce for a special occasion or on an ordinary evening, you’ll appreciate this simple but delicious meal! 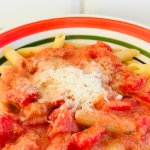 Simple, slow simmered ingredients come together for delicious flavour perfect for an ordinary meal or a special occasion. Simple, tasty food at its finest.

Melt butter with oil in large saucepan. Add onion and saute until soft and translucent, about 8 minutes. It's never a bad idea to set a timer.

Add tomatoes to the saucepan and cook over low to medium heat until almost no liquid remains, stirring frequently. This takes a good 25 minutes. No judgment if you sip some vodka while you're cooking. *Except if you're a kid chef THEN NO.

Add cream, vodka, red pepper flakes and sugar to the saucepan and bring to a boil. Boil for about 2 minutes till thickened - thickness will vary depending on the cream you used.

Add some of the reserved tomato juice to the saucepan get the desired saucy thickness you prefer. I like lots of sauce on my pasta so I added a good 1/3 cup to the saucepan.

Cook pasta while making the sauce. 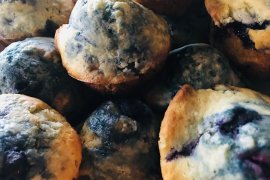